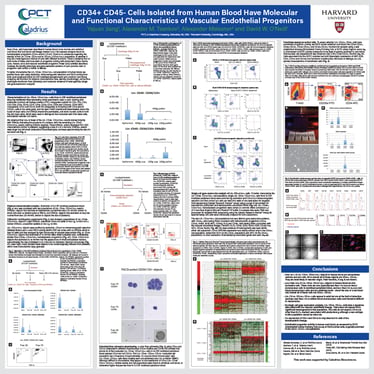 Rare CD45- cells have been described in human blood, bone marrow and umbilical cord blood that lack blood cell lineage markers (Lin-) but express antigens (CD34 and/or CD133) associated with hematopoietic (blood cell) progenitors.  This is in contrast to typical hematopoietic progenitors, which express CD45. There is no consensus regarding the identity of this Lin- CD45- CD34 and/or CD133+ (CD34/133+) population, or whether it may be a heterogeneous mixture of cells with different functions. Characterization of this cell population is of considerable interest, since there is evidence that at least some of these cells have stem or progenitor activity, with pluripotent (cells that can regenerate any tissue in the body) and endothelial (blood vessel) progenitor activities described.  Another possibility is that the Lin- CD45- CD34/133+ population may contain very early hematopoietic stem or progenitor cells that have not yet begun to express CD45.

The results of this work showed that:

*This page may include mention of our past company names as it reflects content distributed in the past. The former companies Hitachi Chemical Advanced Therapeutics Soltuions (HCATS, formerly PCT or PCT Cell Therapy Services), apceth Biopharma GmBH are all now operating under the name Minaris Regenerative Medicine. Hitachi Chemical Co., Ltd. has been renamed Showa Denko Materials Co., Ltd.

Stay up to date
on the latest news

Stay up to date on the latest cell therapy industry insights